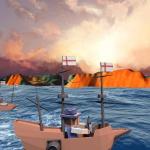 Colonial Kart World is a fun ship battle game that you can play here on gogy play. Enter the block world and choose if you want to fight for the English or for the Spanish team. You'll be playing as a sailor sailing on the sea. The task for you will be to get through the dangerous parts of the game in one piece. Try to sink enemy ships without getting shot down first.

Deep ocean, tidal waves, and a ship which appeared in the middle of a sea battle. As the captain of this ship, you will not be happy about following news. You are being attacked by the whole fleet. They are already firing from their cannons, prepare for counterattack! Turn right and shoot! Got them! Nice shot, captain. Bad news is that there are ten more... and all of them with one goal - to sink your boat.  Can you bring glory to your country? Prove yourself in Colonial Sea Battle at similar gogy games!

We are very happy if you write your feedback and assessment for us. Tell your buddies about this game and have fun with more similar games like Let's Go Fishing at http://www.gogy.xyz/.

You WASD or arrow key to move around, press the left mouse to shoot.